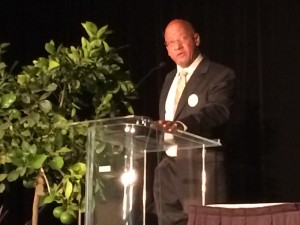 “We are an extraordinary city, and we get it done.”

These words were uttered by Riverside Unified School District (RUSD) Director of Nutrition Services Rodney Taylor at the beginning of his keynote address on day two of the 2nd Annual GrowRIVERSIDE Conference: The Future of Local Food.

Taylor acknowledged the extraordinary progress made since last year’s inaugural GrowRIVERSIDE conference, but pointed out that great amounts of inequity still plague the food system.

“Sixty-eight percent of kids in the Riverside School District come from at-risk homes,” he said. “What are we going to do about it?”

The farm-to-school program at Riverside Unified School District (RUSD) has not only transformed a school district but an entire community, and Taylor believes the momentum generated from the local food and agriculture movement in Riverside can energize and transform the nation.

“We can change the way people think about food and agriculture in America,” he said. “Riverside is a great city, but it’s a city with great need. Farm-to-school has a major impact on our community. A nutrition program can be a catalyst for change in a community.”

In an era when small farmers seem to be squeezed from all sides and find it difficult to earn fair prices for their products, Riverside Unified School District has answered the call in Riverside—last year, it purchased food from 19 area farmers. Taylor wants to increase this number and believes this kind of success can be replicated all across the country.

“If you grow food in Riverside, this school district will buy it,” he said. “If we bought more from local farmers, we wouldn’t have to worry about local farmers going extinct in America.”

Similar to Robert Egger and his staff at L.A. Kitchen procuring “imperfect” (but perfectly good) produce to help feed the hungry, Taylor said he and his team of chefs at the Riverside Unified School District can use blemished or small oranges and other fruit.

Taylor called the crowd not only to action but also to work together in community in transforming the food system in Riverside and beyond so it can be equitable to all. No excuses.

“I’m not the butt of jokes, but I am a catalyst for change,” said Taylor, alluding to the days when people doubted a farm-to-school program would work at a large public school district. “But nothing is done in a vacuum. It’s done through these partnerships that we see happening today.”

These organizations in Riverside have been percolating for quite a while, back to the first GrowRIVERSIDE conference last year and before. Taylor praised the Riverside community’s involved in local food system development and encouraged people to keep thinking outside the box.

Taylor concluded his remarks by again stressing that the only way to get things done is by working together.

“Talk to each other, think about what it is we’re trying to do,” he said. “No more selfish interest, no more operating in silos—we’ve got work to do!”

But when it comes to sustainable food production, working together as a community is only a part (albeit a very large one) of the equation. The other part? Water. And as Southern California is enduring one of its worst dry spells ever, the sense of urgency regarding water management and conservation only increases.

This urgency was reflected in an action taken by California’s State Water Resources Control Board on June 12. The board placed further restrictions and limits on water usage by farmers who possess senior water rights.

Celeste Cantú, the general manager at the Santa Ana Watershed Project Authority, showed slides illustrating the dramatic water loss from one of California’s primary reservoirs, Lake Oroville in the northern part of the state. Lake Mead, another main source of water for California, is severely depleted.

California has also seen a two-degree average temperature increase in the last 65 years, and this spring the Sierra Nevada Mountains had no snowpack. While the entire state has been affected, farmers, in particular, have been hit hard.

“Agriculture has taken it on the chin severely,” said Cantú. Her advice to farmers? Make every drop count.

Water can be obtained from other places, but costs can make this prohibitive.

“As we look for water in other places, it becomes increasingly expensive,” said Todd Jorgensen, water operations manager for Riverside Public Utilities. “But there are a lot of tools out there to help us be more efficient.”

Craig Miller, deputy general manager at Western Municipal Water District, said a good first start is for agriculture to make the switch to recycled water for irrigation. According to Jorgensen, there has been interest among some municipalities in the southwestern United States to form regional alliances to have greater access to water.

Cantú said, grass is public enemy No. 1 when it comes to water conservation, as it requires lots of water and fertilizer, but feeds nobody.

“So it sounds like the future of GrowRIVERSIDE is converting all of our lawns to fruit crops,” said Monte Vista Water District public affairs director Justin Scott-Coe, half-jokingly.

Looking to the time between now and the next GrowRIVERSIDE conference, Mac Arthur envisions more partnerships with the Riverside Unified School District in creating a local food hub, encouraging all area supermarkets to buy locally, and the start of an ombudsman service at the city’s economic development office for the city’s Greenbelt.

“There’s no part of our city that’s not ripe for some sort of agriculture,” said City Councilmember Mike Gardner. “The possibilities are really exciting and almost unlimited. I will see you in the garden—now, grow forth and prosper!” 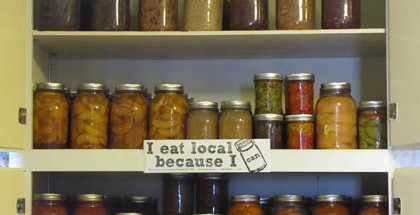