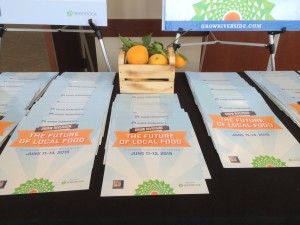 These four focuses were brought into sharp relief by numerous speakers and panelists as well as conference-goers, who discussed a wide variety of issues including local food marketplaces, developing urban farms, marketing and distribution, urban indoor farming, crop diversification, climate, farm-to-school, an update on the work of the Riverside Food Systems Alliance, compost management, water usage, and more.

On Saturday, the last day of the conference, there was a Community Farm Fest and numerous workshops designed to help Riversiders better participate in the local food and agriculture movement.

Leaders of the local food and agriculture movement in Riverside were pleased with the three-day event, and are excited about what the future holds.

“The Community Farm Fest gained a lot of traction with the community,” said Erin Gettis, principal planner and city historic preservation officer with the City of Riverside. “Between the conference dinner and Saturday, more than 600 people attended GrowRIVERSIDE. The conference total was 430.”

Gettis appreciated this multifaceted approach to the conference, and she also took note of the greater amount of younger people at the event, compared to last year.

Gettis is optimistic about getting a Riverside food hub up-and-running by next year’s GrowRIVERSIDE gathering. She would also like to see a farmer mentorship program get started in the coming year.

“We’re seeing really good things,” she said. “It’s hard to find people who have not heard about GrowRIVERSIDE.”

The success of last year’s inaugural GrowRIVERSIDE conference has grown to the point that the local food and agriculture movement is being promoted by members of the community. This has not gone unnoticed by Yvette Sennewald, who works with Riverside’s Community Engagement teams.

“I’ve been involved since last year, and the difference between last year and this year has been the incorporation of the community,” Sennewald said. “They are taking ownership of what’s going on in their city.”

Diana Ruiz of the Riverside-Corona Resource Conservation District wants to see the Riverside Food Systems Alliance take off in a big way. She envisions the formation of priority working groups within the larger food organization, and hopes that more people in the community join the alliance. Ruiz is pleased that sustainability is becoming the norm in Southern California, and she attributes this to younger people really getting it.

“The critical mass of young people devoted to this cause is growing in Southern California,” she said.

Ruiz would like to see even more community gardens and people beautifying their neighborhoods with native plants.

“This is getting back to our roots,” she said.

“GrowRIVERSIDE has focused our efforts in Riverside and the region,” said Riverside City Council Member Jim Perry, who stressed not only the health and environmental benefits of local food and agriculture, but also its economic development advantages.

“I want GrowRIVERSIDE to continue its community presence here,” said Riverside City Council Member Chris Mac Arthur, who hopes for even more agricultural diversity in the city’s Greenbelt, including orchards and row crops.

MacArthur also wants to see more edible plants in the city’s parks, and he would like to see a program that matches up landowners with farmers.

“Use those vacant fields and turn them into working farms,” he said. “In getting back to our heritage, it helps people take even more pride in their city. Riversiders are very proud about Riverside.”

Joyce Jong, agricultural business development coordinator with the City of Riverside Office of Economic Development, is very pleased with the progress and momentum generated by GrowRIVERSIDE, but still sees many untapped opportunities.

“I would like to see this movement grow,” Jong said. “There are still members of the community who are not aware of GrowRIVERSIDE, so it’s important to reach out to them as well.”

Particularly, Jong is pleased that Riverside’s leadership has allowed GrowRIVERSIDE and the larger local food and agriculture movement in Riverside to flourish.

“Our city council gets it,” she said. “They allocated resources to move forward.”

Perhaps one community member who might want to get involved is a taxi driver who shuttled a Seedstock reporter from the hotel to the airport.

“Sustainable urban agriculture,” the reporter answered after the driver asked about what was going on at the Riverside Convention Center during the past three days.

“What’s that? Explain,” said the driver.

After a brief explanation from the reporter, the taxi driver talked for 10 minutes about the amount of water needed for grass and palm trees, and wondered out loud why more crop-bearing plants and trees cannot take the place of grass and palms.

The Riverside taxi driver gets it too.

A Case for Economically Viable Small Farms that Benefit Community and Economy; 2... May 15, 2015 | Robert Puro