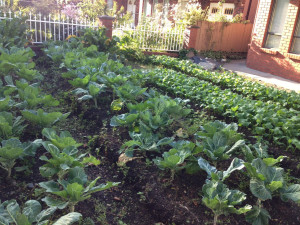 A plot of land in Vancouver, British Columbia has served as the site of a research study to determine the water needs of urban agriculture. (Photo courtesy Mark Johnson)

Cities around the world are transforming blight into gardens, turning bleak rooftops into greenspace, and using empty buildings for vertical farming. But will this upsurge in urban agriculture create even more demand for water?

This is the question Mark Johnson, professor of water and sustainability at The University of British Columbia, is looking to address. Johnson, along with other colleagues, has developed a tool to measure just how much water urban agriculture operations need.

The tool, dubbed CityCrop, uses LiDAR (remote sensing technology—stands for Light Detection and Ranging) and climate readings to determine the level of shade provided by buildings and trees. This data helps scientists figure out city-dwelling plants’ rates of evapotranspiration, which in turn reveals their water needs.

Johnson and his cohorts applied CityCrop to one square kilometer in a neighborhood in Vancouver, British Columbia. The tool showed that shade caused a 12 percent light reduction, which resulted in a 3.5 percent decrease in crop production. The median crop water footprint was 9 percent less than areas not receiving shade.

During the 75-day cropping cycle observed as part of the study, it was found that median crop water requirements were 17 percent less than a well-irrigated lawn.

The research team concluded that if all lawns in the study area were replaced by food crops, 37 percent of residents living in this same area would be able to satisfy their annual vegetable consumption needs over the span of a 150-day growing season.

However, watering regulations that only apply to lawns could result in a dramatic increase of water usage for crop growth. Nevertheless, researchers believe the CityCrop model can serve as an effective tool for municipalities in forming water usage policy.

For now, the focus is on the future.

Ultimately, Johnson says efficient water usage is all about supply and demand. Another important issue is the quality of water being used. For example, it might not be appropriate to use fresh, clean water to hydrate crops. And of course, in light of the western drought, water conservation is becoming increasingly more important.

Johnson is optimistic that water can be used more efficiently.

“Water use can be mitigated by many means,” he says, citing the availability of off-the-shelf devices such as spring-loaded timers, drip irrigation systems, closed-loop agriculture operations, and rain barrels.

While urban agriculture’s overall demand for water is currently very small, says Johnson, water is essential for the growing of food. As urban agriculture rises, other uses could increasingly be seen as luxuries.

“A bird’s eye view of Los Angeles reveals many swimming pools,” he says. “We can also cut out golf courses and car washes in times of water shortages—it comes down to the total amount of water used. Reducing non-productive uses of water is key.”

Johnson believes that food production in cities will become more prevalent as time goes on.

“City planners are leaning toward including food production in long-term planning,” he says. “People can grow many things in urban sites.”

And he sees urban agriculture’s future growing not only in the developed Western world, but in developing countries as well.

“Urban agriculture is part of the development of food production,” says Johnson. He points to such innovations as hydroponic operations in parking garages. “In the future, agriculture will likely continue to be practiced in populated places.”

While urban agriculture may never displace the vast fields of monoculture agriculture, the food produced in cities tends to be more diverse and nutritious, according to Johnson.

“Food and water are big questions for a growing population,” Johnson says. “In looking where food can be grown in the future, it’s important that cities play a role in food production and in becoming centers of nutrient-dense food.”