Open to Community, GrowRIVERSIDE Gathering on Thursday, May 7 to Focus on Value-added Food Business

On the heels of the success of the first GrowRIVERSIDE Community Gathering comes the second in the series of gatherings, which will take place on Thursday, May 7 at Stewarts Boathouse at Fairmount Park from 6:00pm – 8:30pm and focus on the development of value-added local food businesses. Register here for the free event: http://growriversidegathering.eventbrite.com

The event will feature a panel discussion with local Riverside value-added food business owners and presentations by Angela Janus, Founder of ShareKitchen, on how the company’s incubator program works to help value-added local food businesses grow and thrive in Riverside, and Nick Melquiades of the Riverside Food Co-op, who will discuss how the group works with the community and provides new market access for local farmers.

There will also be an open forum discussion in which attending community members will have the floor to discuss any local food initiatives that they are working on and how others in the community can get involved.

‘GrowRIVERSIDE Community Gatherings’ function as nexuses for networking, community building and solution development around the core local food system issues in the City from growing new food businesses and farmers to resident concerns and food access.

So bring your business cards, your ideas on how to build a more vibrant food system in Riverside and your curiosity and eagerness to learn and join us for an exciting discussion on how to invigorate the local food landscape in the City of Riverside.

Angela Janus – Angela  is the Executive Director and Founder of ShareKitchen, a Non-Profit Kitchen Incubator program located in the Coachella Valley cities of Cathedral City and Coachella. ShareKitchen provides business development and support services to culinary entrepreneurs including access to a fully licensed and insured shared commercial kitchen.

Nick Melquiades – Nick is a member of the Riverside Food Co-op’s CORE (Community of Outstanding and Resourceful Entrepreneurs) Team. Formed in 2012, the Riverside Food Co-op (RFC) has eventual plans to open a store. The RFC has been incorporated for the past year, and although it does not yet operate a store, it currently offers Crop Boxes to members.

Curtis Cruz – Curtis is founder of My Goodness, a local cottage food organization in the City of Riverside dedicated to producing high quality artisan breads.

‘Dinner in the Grove’ to Highlight Importance of Local Food and Farm... May 1, 2015 | seedstock 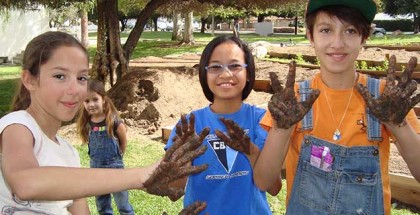